The Militia are citizen-soldiers, with barely any training, that willfully take arms and defend their homeland against invaders, rebels, traitors or rioters. They are common people, like clerks, doctors, teamsters and the like that when the time comes they reunite in the Palace, put on the Military Green and take up the streets.

These units remain loyal to El Presidente at all times, being one of the very few military entities that never turn sides in a Coup.

Due to them being part-time soldiers they lack the training and professionalism of a full-fledged army, or even a conscripted one, but they make up for it with numbers.

These units are available since the World Wars Era and only when the Constitution article of Armed Forces is set to "Militia".

Their effectiveness can be raised temporarily if the Military Drills edict is issued.

The number of Militia Squads that spawn depend on the number of enemy squads that form. There is never an exact number, but generally they even out the squad numbers on your side (e.g. 5 rebel squads vs. 1 palace squad and 4 militia squads). Still, there is no exact amount or guarantee that those amount of squads will form as the Militia spawning is also partially random in nature; but generally it tries to even your forces to match the enemy.

Even if your Military outnumbers the rebels or any enemy forces, a minimum of 2 Militia squads will always form up at all times.

The Militia, even if it shares the same uniform as the Infantry and Commandos, has one subtle difference: its military clothes, helmet and bulletproof vest are a darker, woodland green, more akin to guerrilla fighters. They also dress with black army boots and belt. They are equipped with two ammunition pouches and an M16A2 assault rifle. 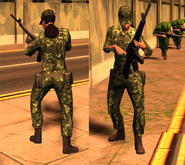