The Enemy Infantry are soldiers from abroad that invade Tropico, they come ashore to cause mayhem, destroy certain buildings, and, in some cases, overrun the Palace, possibly to overthrow El Presidente and install a Puppet Presidente.

These soldiers represent any of the Foreign Powers from the World Wars Era onward when any of them has hostile relations with the nation. They normally target Military, Industry or Production buildings, and sometimes the Palace for last. They are normally accompanied by Enemy Tanks. 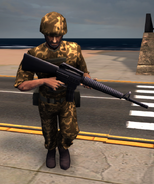