Enemy Elite Infantry are foreign soldiers. They are elite musketeers that in theory appear in the Colonial Era, but instead represent Terrorists in [Modern Times (Tropico 5)|[Modern Times]] as part of an alliance requirement with the United States. These men are required to be defeated in order to close such an agreement.

The Enemy Elite infantry share the same design as all musketeers in the game, dressing in violet coats with white vests under them, a three pointed black leather hat, white trousers, leather boots with white stockings, two ammunition pouches and a musket. 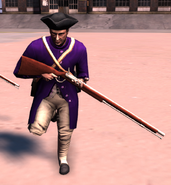