Between 56 and 64
No information

Elite Rangers are a type of military squad in Espionage.

They are the successors of the Colonial Rangers, and are available in the Cold War Era. They garrison the Ranger Corps, but judging by their uniform the squad could have merged into the ranks of the Commandos.

Since by this time all the Tropican territory is completely explored, these men, taking advantage of their endurance, are instead tasked with only being part of the defense of the island against any invasion, riot, coup or rebellion.

The Elite Rangers wear uniforms identical to the Commandos: 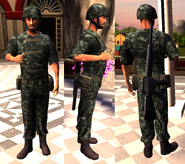